Crataegus monogyna is native to Europe, West Asia, and Northwest Africa. It is also known as Hawthorn, Mayblossom, Maythorn, Quickthorn, Whitethorn, Motherdie, Haw, Single-seeded Hawthorn or Oneseed Hawthorn. It is a small tree or a shrub that grows to about 14 meters or 45ft. It is part of the Rosaceae family of plants. You sometimes find this plant as a hedge rather than a tree. Crataegus monogyna is also good firewood which provides a lot of heat without producing a lot of smoke.

I have an affection for this tree as I remember it from childhood. The home where I was born and grew up in had a mature Hawthorn tree as the focal point on the side of the lawn and each spring would fill with a profusion of blossoms and later with the red berries.

Young Crataegus monogyna stem has thorns but mature tree stem is dull brown. The foliage is about 1.5in or 4cm long, deeply lobed, and obovate. It is darker green above and paler underneath. Flowers are hermaphrodite. They appear in corymbs of 3 to 5 and have 5 petals and white in color. They are slightly fragrant but not noticeable. The fruit looks like a berry but actually it resembles an apple or pome-like and contains a single seed. The birds eat the fruit in winter.

This deciduous shrub or tree flower in spring with creamish-white-colored flowers and berries are red. Plant it in the sun or partial shade. Propagate by seed. Watch out from leaf spot and fireblight as well caterpillars, gall mites and aphids.

Crataegus monogyna is a source of antioxidants and has been investigated for medicinal purposes such as treating cardiac insufficiency. The fruit or berries as well as petals and leaves are edible. The fruit is made into syrups and jellies and jam. The fruit is called the Haw. The petals were used in an almond-milk based pottage in medieval England called Spinee. And the leaves especially when they are tender are used in salads.

Probably the oldest Tree in France is a Hawthorn next to Saint-Mars-sur-la-Futaie church in the Mayenne in Western France. 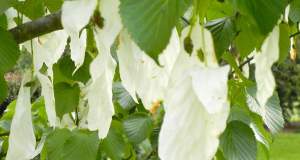 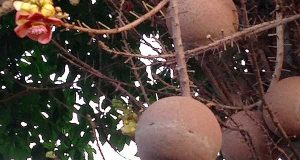 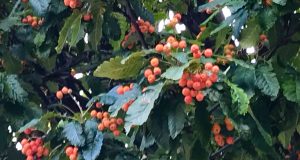