Dicentra formosa is also known as Western Wild, Common Bleeding Heart, Wild Bleeding Heart, or Pacific Bleeding Heart. It is sometimes confused for Dicentra eximia which has narrower flowers. It is native to the Pacific Coast of North America. This herbaceous perennial is part of the Papaveraceae family of plants. This flowering plant has fern-like leaves that are divided many times and grow from rhizomes. It is native to moist forests.

Dicentra formosa can grow to about 18in or 45cm. The flowers are pendulous, heart-shaped and in clusters of 5 to 15 and appear from spring to autumn. They have four petals attached at the bottom, it has two small sepals behind the petals. The flowers are usually pink opening from a deep pink buds but there are also white and red varieties. After flowering, it produces seeds in pods. Dicentra formosa self-seeds.

Plant it in moist, fertile and humus rich soil which is slightly alkaline. It prefers partial shade more than full sun. Propagate from division early in spring or from seed sown in spring. No pruning is necessary and it is usually disease-free, but watch out for slugs and snails. 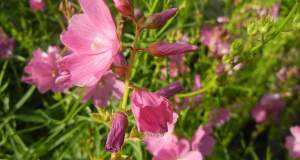 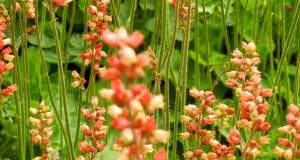