Alisma plantago-aquatica is an aquatic rhizomatous perennial. It is also commonly known as Water Plantain, European Water Plantain, Common Water Plantain, Thumbwort, Devil’s Spoon or Mad Dog Weed. It belongs to the Alismataceae family of plants. It is native to Southern Europe and Northern Africa.

I came across this plant at Kew Garden’s Waterlily House. Did you know Waterlily house was actually built in 1852 to showcase the Victoria amazonica? They were first seen in Bolivia in 1801 and later named Victoria amazonica after Queen Victoria. The name of the Alisma plantago-aquatica is Alisma from Celtic meaning water and Plantago, Latin for the look of its leaves from the same-named plant, also known as Plantain.

Alisma plantago-aquatica has elliptic leaves that form a basal rosettes up to about 30cm or 12in and panicles of tiny white (sometimes purple) flowers and leaves that open on tall stalks that could grow to about 50cm or 25in. It is a deciduous plant that flowers in the summer. The tiny flowers are aoubt 1cm or 1/8″ with 3 petals. It likes the sun you can plant them in the pond margins and in actual water up to 30cm or 12in deep. Alisma plantago-aquatica is pest-free and disease-free and low maintenance, however, you should deadhead the flowers to prevent self-seeding. You can propagate from seed or rhizome division. 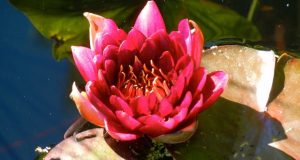 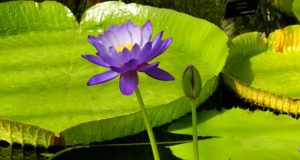 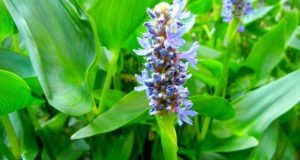