Phormium tenax, also known as New Zealand Flax, Common Flax Lily and is part of the Hemerocallidaceae family of plants. It is an evergreen, clump-forming, perennial plant, native to New Zealand. Originally this plant was used as fiber for ropes and textiles in Māori culture (indigenous Polynesian people in New Zealand). Nowadays it is more of an ornamental garden plant with an exotic flavor. It flowers in the summer with spikes that have small dark-red, trump-shaped flowers. The flowers are protandrous.

The leaves are like swords forming in a circular fan, a very striking look in the garden. Interestingly in its native region, Phormium tenax is considered a week or invasive. Phormium tenax usually grows in seasonal swamps or flooded land, however, it does well in well-drained soil as well. The birds are attracted to the flowers due to the larger than normal amount of nectar.

You can propagate by seed as this is also a natural way of propagation, but the plant also reproduces through ramets from underground rhizomes. In the garden, both full sun and partial shade would do and plant it in fertile well-drained soil. It is an easy-growing, low-maintenance plant that is generally disease-free. Phormium tenax does not need pruning but you can remove damaged leaves in early spring. 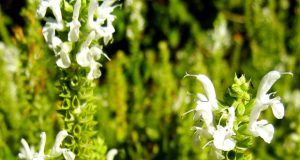 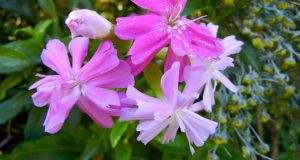 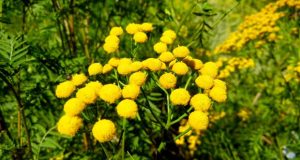