It is native widely in Asia, including, Southern Himalayas, Northern Indochina, Northern, and Central India, and isolated areas around the Caspian Sea. There are records going back 3000 years cultivated in many Asian countries and also popular for its edible seeds. Not to be confused with water lilies or Nymphaea while in some cases it used to be identified as such.

Nelumbo nucifera leaves can grow up to 80cm or 3ft wide and the flower almost 30cm or 12in wide. It has solitary pink or white flowers that appear on long stalks above the water in summer. The plant is usually planted in soil and the tall leaves and flowers are above the water. Plant them in heavy loam enriched with farmyard manure when available, in general, they need nutrient-rich soil. Nelumbo nucifera prefers full sun exposure. They need to be at a depth of about 50cm or 20in. Remove foliage when they fade. If you grow them in colder climates you need to gradually reduce the water level remove the containers they are planted in and store them in a frost-free location.

Interestingly Nelumbo nucifera is one of the very few plants that can regulate its temperature just as humans do. Research shows that it maintains a temperature of 30-35° C or 86-95° F even in cold temperatures. It is believed this is to help and attract pollinators. Nelumbo nucifera seeds have a very long life, it produces a lot of seeds that sit at the bottom of lakes and water landscapes for years even when lakes or ponds die down and a new flood could transport them to a new landscape where given the right climate, it generates.

Lotus is also farmed for human consumption almost 70% of this cultivation or farming happens in China. Almost all parts of Lotus plants are consumed in some form or another. Rhizomes are harvested and consumed as vegetables in many Asian countries. Lotus can be fried or cooked in soups or even pickled. In Korea, they consume Lotus root tea. In Sri Lanka, it is cooked with coconut milk. Nelumbo nucifera rhizomes contain a lot of starch and could be similar in texture to potatoes. Nelumbo nucifera seeds are consumed but are usually dried through various methods. They are used in moon cakes, rice wine, and ice cream. The tea from the seed is consumed in Korea, China and Vietnam.

Nelumbo nucifera stems are used in Vietnamese cuisine in salads. In India, it is used in soups such as “Kamal gate ki Sabji”(कमल गट्टे की सब्जी) or they are fried as a side plate called n Kerala (in Malayalam “താമര”) or Tamil Nadu or Tamara Vathal. The leaves of Nelumbo nucifera are used as a tea in China and Korea, also it is used for wrapping rice or other dishes fit for steaming, examples being lo man gai in China and kaolin for bai bua in Thailand. The flowers are made in tea in Korea. Even the stamens are dried and made into tea in China. Though most of these parts can be eaten raw it’s better not to in order to prevent the risk of parasites.

Nelumbo nucifera is all known for purifying water and has been studied for wastewater treatment. It also reduces algae growth and increases oxygenations in the water. It seems to be even better than Water Hyacinths which is also used for the same purpose. As you can see Nelumbo nucifera has numerous uses, its plant fibers are used to make a fabric called cya thingahn used to dress Buddha images mostly in Myanmar and Cambodia. It is also used in modern medicine production by pharmaceuticals. 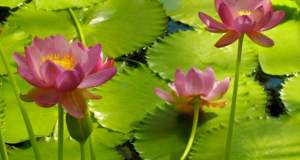 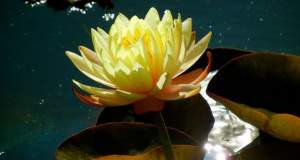 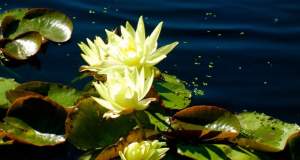