Echinacea purpurea is also known as Rudbeckia echinacea purpurea, Rudbeckia purpurea, Black Samson, Hedgehog Coneflower, Purple Daisy, Eastern Purple Coneflower, Purple Coneflower and belongs to the daisy family, Asteraceae. It has beautiful purple/pink flowers that bloom for a long period and love the sun. Purpurea actually refers to the reddish-purple color. The old name Rudbeckia is due to classification in 1753 by Linnaeus in his book. Later in 1794, it was reclassified as the Echinacea genus.

Echinacea purpurea has coarsely haired leaves. There are coral and white varieties as well as the pink. Echinaceas are drought-tolerant, herbaceous perennial plants. They are native to North America. Echinacea is known to have immunological effects. The glycoproteins in the echinacea root could stimulate the immune system. Therefore this plant is used in the pharmaceutical trade.

Echinacea purpurea is a clump-forming, deciduous plant that flowers in summer and autumn. Plant it in the full sun or partial shade preferably in humus-rich soil which is well-drained.

Propagate from seed sown in early spring or by division in spring or autumn. You can also propagate by root cuttings in late autumn. Echinacea purpurea can grow to 1.5m or 5ft. They are easy to grow cut back the stems to encourage longer flowering season and don’t worry about pest or disease as they seem to have little problems with that.

Other species of Echinacea include: 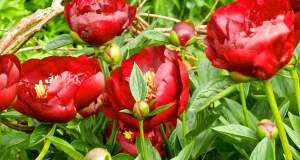