I think one of the symbols of springs has become the flowering cherry tree. Prunus serrulata is a species of cherry trees that is native to Asia in particular, China, Korea, and Japan. Prunus serrulata is a deciduous tree that grows from 8 to 12 meters that is about 26 to 39ft. It has smooth bark green leaves similar to other cherry trees but blossoms usually appear before the leaves. The flowers are produced in clusters and wild ones are single like many other species. Unlike the wild cherry trees it produces cherries that are bitter, therefore should not be consumed raw.

In general, this cherry tree is appreciated for its flower and is considered an ornamental tree and not for its fruit. Therefore it has been cultivated in many countries and now there are double flowers as well the single and the flowers range from white to pink, many cultivars were based on Oshima Cherry. Many major cities in the world now display the cherry blossoms in their landscape.

But cherry blossom which is considered the national flower of Japan is known as Sakura. There is a centuries-old tradition of drinking sake under the Sakura tree, this is called Hanami. It stated in the 8th Century and was initiated the custom of the imperial court passed on to later to the general public over the centuries. In Japan, they actually have scientists tracking the cherry blossom season which usually starts in Okinawa in January and moving north. reaching Kyoto sometime in March. And as with other things this seasonality is affected by global warming. Basically the tradition of the Hanami festival celebrates the beauty of the cherry tree.

Prunus serrulata usually is short-lived it lasts about 20 years. and there upright or weeping varieties. The leaves turn beautiful colors of yellow and red in autumn which adds another beautiful element to its presence in the landscape. Prunus serrulata prefers full sun but will do in partial shade, but it will require at least 4 hours of direct sunlight. Plant them in early spring after the danger of any frost if you live in a cold climate. It is unfortunately prone to disease. Watch out for silver leaf, blossom wilt, mining moths, bullfinches, leaf-mining moths, or caterpillars. They usually do well in moist and fertile well-drained soil. Prunus serrulata is rather easy to grow, generally, it is better not to prune them except for minor removing of dead branches. If you plan to prune them for the shape try to do it when the flowers end.

There are many varieties but some popular ones are:

asano: it is a chrysanthemum flowered variety, deep pink in color, new leaves bronze in color.

Mt. Fuji or shirotae: white flowers that turn pinkish before they fall, larger in size and it is a horizontal branch variety. It is suitable for smaller gardens.

shirofugen: small double pink flowers that turn to white and leaves are reddish, it is also fragrant.

shogetsu: Hanging clusters of 6 flowers, white and large some almost 2in or 5cm 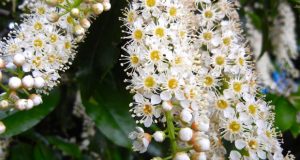 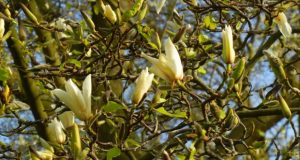 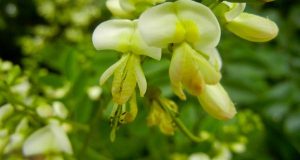